June is a busy month for the avid stitcher! I’m occasionally avid, so I was somewhat busy…

First came my TV appearance on June 4th, on a local news station’s morning show. You can view it here – watch me teach a TV personality how to yarn bomb!
It was a lot of fun to film and honestly, it made me wish I could do more things like this. I’m not sure that a mid-life career change to tv/radio personality is in the cards for me, but I’d do more if I could! 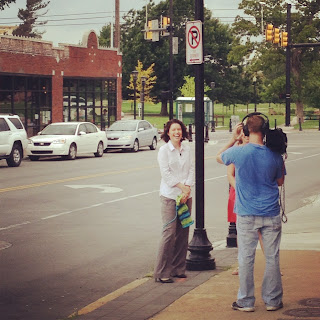 June 8th was International Yarn Bombing Day! I worked for several weeks trying to knit straight pieces on a small circular knitting machine to prepare for the event.  I say “trying to knit” on the circular machine – it looked more like I was fighting with it and if you had heard me cursing while trying to learn how to use it, you would agree… 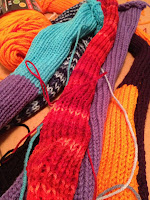 I know it would be nice to say everything had been hand-knit, but this time around I opted for quantity over quality. And I’m glad I did, because even with all my fervent wrestling with that thing, we still didn’t end up with as much material as I would have liked.
We decorated at Guthrie Green, in the Brady Arts District in downtown Tulsa. We had gotten their permission to do it – I think they were pretty excited to have us do it. We put up some round tube-like pieces on some steel posts, and stitched some flat pieces to a bunch of white poles. The result was awesome! Sadly, someone stole the tube pieces, but the rest was intact, at least for a few days… 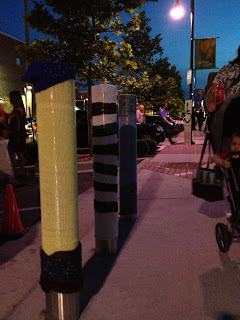 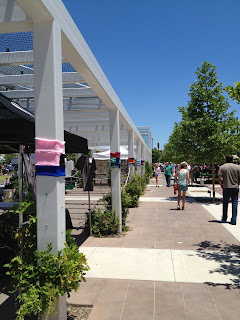 And, as you read in DXZ’s previous post, June 8-16 was World Wide Knit in Public Day. Yarn Bomb Tulsa hosted a Knit in Public Day event at Guthrie Green. We had quite a few people turn out – it was a lot of fun! The weather wasn’t too hot, especially if you found a tree to sit under, like I did. Sadly, I STILL got sunburned! It was a lot of fun and I’m sure we’ll try to make it an even bigger event next year. 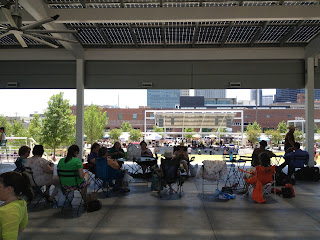 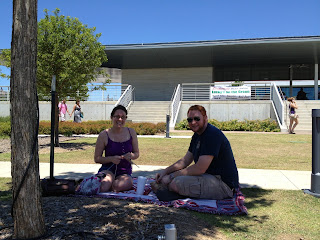 Now I’m just doing some relaxing and working on a few other projects and planning for a few vacations… so stay tuned for more Summer Knitting  updates!

moving a mountain with a teaspoon

the mindful sheep
The Mindful Sheep is an ongoing collaborative conversation between Ace and DXZ, mostly about yarn, knitting, and fiber arts. Feel free to join the conversation!