Wednesday March 13th is the two-year anniversary of my mother’s death. In some ways it seems like just yesterday, but if I really stop to think about it, I’ve come so far since then…
In December of 2010, my mom, my dad, my aunt and uncle and I began a pilgrimage. This journey brought us all together and has bound us to each other in a way that can’t really be described.
My mom started a new pilgrimage on 3/13/11 – the four of us still travel together on this one.
Two years down the road, things look so different. Somehow, things are much more peaceful. And we have the feeling we are on the verge of something new. Like the coming spring, we can feel something in the air. Who knows what that could be...
But for today, we look back for a moment.  Here are some words that we put together – each of us reflecting on this two year anniversary. Thank you Jan, Deepti, Michael, Monika. I love you all so very much.


Michael
Monika/Monique
In memory she can be many persons, so who I write about today may say more about me than about her. Who am I remembering just now? Over the past several days as I thought about what I might write on this second anniversary of her death, distinctly different women came to mind.
First, her name, Monika is a right and proper name for a Saxon girl, but she preferred Monique, a name she was given while working in Switzerland. I always preferred Monika as being more ‘authentic’, though Monique having one less syllable is easier to pronounce.
As I am feeling today, the most significant gift Monika offered in our relationship was her joy in and commitment to ceremony, something that was quite ‘foreign’ to my Sunset Beach loner upbringing.
For me, the most meaningful example of her joy and commitment to ceremony was her celebration of Advent. Early in our marriage she asked to make a little table stand for an Adventskranz. The stand had a star shaped base with a 16 inch mast. I painted it a warm off red. Monika would then suspend, by four red ribbons, the Krantz made of fir branches. It hung as a wreath, parallel to the table just above the base. On the Krantz she would secure four white styrene candles, and at the top of the mast she placed a little painted angel, a German folk art angel made of turned wood.
On the first Sunday of Advent Monika would set the table with a folk table cloth, the Adventskranz in the center with the Adventskalender nearby, set out two coffee cups on saucers (not Meisen though)and brew a pot of coffee. When the coffee was ready, the first of the four candles would be lit and we would sit down and enjoy the atmosphere. She would have stories to tell of other Advents, and at some point we would punch open the first day of the Adventskanender and share the chocolate that had been hidden inside.
The ceremony/ritual was repeated on the remaining three Sundays of Advent with successively more candles being lit. (The Kalender chocolate was a daily ritual in itself.)
Before meeting and marrying Monika, I had never realized that one might actually pause, and take the time to sit down to consider and enjoy a fundamentally religious celebration with another person. And since our divorce, I believe the only occasion in which I have sat with others to consider something fundamentally human was with her daughter, brother and sister-in-law as we celebrated her death.

*****
Jan
A Tribute to my Sister
When I entered the world, it had already been discovered—by my sister. She was born a year before me. The adults were not really present. My father had his knee-caps shot off in Russia, and my mother did her best to survive in a dying country.
My sister didn't really have to take care of me, but she protected me. She knew everything. She knew the terror and panic of British, American and Russian bombs, while I was quite happy to spend a night in the cellar; that was way better than having to go to bed. And the fires, afterwards—what a sight! I tell you, you have been deprived of some exciting experiences. Never in a thousand years did it occur to me that these explosive educational instruments were aimed at me. But Monika knew it.
We were small then. Later on we were poor—which I thought was normal. But Monika knew how humiliating poverty is. For her the world was real. For me it is a dream from which I am trying to wake.
When she was dying I was trying to tell her that death is not a disease. After all, I also know something. It is a transformation. She understood it. But I don't think she could believe me. All men are liars. I know that.
She experienced it.

Deepti
For one whose life-path was so solitary, this was Monique’s great gift to us all:  Her suffering drew us together on a journey that has bonded us, and given new meaning to the concept “family.”
Two years ago: it is winter, overcast, semi-lit, a perpetual candle shining in the darkness.  It is the time we each brought our deepest part to a pilgrimage that began in shock and evolved into unity.  It was a time when we came together, celebrated, loved one another.  For us on the Camino, our continual sharing helped steady the family vessel even as one prepared for departure.
Here are some really remarkable things about Monique.
She moved often – and yet had the astonishing capacity for putting everything in place, making her environment beautiful, and appearing entirely at home within a day of a move.
Her possessions were never chipped, frayed, or in disrepair.  Now read that again, and think about your own household.  See how amazing?
She was a singular repository of folk culture, both theoretical (her library was a wonder) and practical, with her paper cuts, fiber crafts, and special cuisine.  I shall always see the careful, masterful movements of her hands over that last Christmas dinner – the cooking lesson of a lifetime.
These qualities speak of great mindfulness, presence, and respect --  for herself, for her environment, and for those entering her sphere. At core, this is who she was. Anything else was simply static.
This is Monique’s legacy:  family, quality of life, and a living connection with the arts that nourish us daily.  Thank you, Monique, my dear sister.  We are grateful.  We are grateful.  We are grateful.

Andrea
Merriam-Webster defines a hero as – “a mythological or legendary figure often of divine descent endowed with great strength or ability”…
Two years ago, my Uncle Jan told me I was a hero. I’d never been called a hero before. I’m not sure it’s an accurate statement, but I’m glad he thinks I am one.
On December 7, 2010 I took my mom to the ER and they told us she had cancer. The world as I knew it completely fell away. I remember a lot from that time, but I also don’t remember any of it. I just showed up and did what needed to be done. I can’t believe I did that. My sole purpose, I felt, was to make sure that she had everything she needed as she made her transition.
My Mom always used to tell me that one of the meanings of the name “Andrea” was “lion-hearted woman.” She always seemed confident that this was a good choice of names for me, although I could never see it. That didn’t seem to accurately define me at all. But in March 2011, I finally realized that she had gotten it right.
My Dad is a hero too. I called him that December night from the ER and told him my mom had cancer and that I didn’t know how we were going get through it. Before the sun had come up, he had made the decision to come from California to Tulsa to help me. He stayed 3 months, to the very end. He was a constant calm presence – providing chocolate, tools, soup, and a steady hand. He doesn’t like it when I say I couldn’t have done it without him so I’ll just say, I’m really really glad I didn’t have to. Thanks Dad, you are the best.
My Mom’s brother Jan is also a hero. He and my Aunt Deepti came to Tulsa for 2 weeks over Christmas 2010. He saw things in a way that I just didn’t, and he gave my mom the comfort of family. He propped her up, and had a way of calming her that no one else had. I remember their last phone call, the last time they talked to each other. He was so good to her – most definitely a hero.
And Deepti – also a true hero. She is a master of diffusing any tense situation (of which there were a few); she is patient, and incredibly compassionate. When she and Jan left Tulsa on New Year’s Day 2011, I remember thinking, “what am I going to do now??” Well for the following months, and really, for these last two years, she has been a constant companion via text message. Little bits of wisdom and compassion imparted via iMessage have helped me so much! Our friendship has grown and new creative collaborations are in the works. The beginning of something good.
Needless to say, I miss my Mom. She was always there for me. I think of her often and only after she’s gone do I realize what an impact she has on my life. Not only the shaping of my character (Discipline! Independence! Intellect!) but also the traditions I choose to follow and how I create the space around me. Every time I eat a soft-boiled egg, I think of her. Every time I hear the word “tasty.” And so often I wish I could call her to tell her something, or invite her for Sunday breakfast.
She loved color. She loved music, and books. She believed in making ordinary experiences special. She loved hand-made things and she loved cooking. However, she could never really get out of survival-mode very often. She lived under stress.
I hope that wherever she is now, she is happy, and at peace. She deserves it.
She is the biggest hero of all. 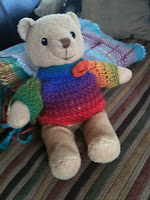 moving a mountain with a teaspoon

the mindful sheep
The Mindful Sheep is an ongoing collaborative conversation between Ace and DXZ, mostly about yarn, knitting, and fiber arts. Feel free to join the conversation!